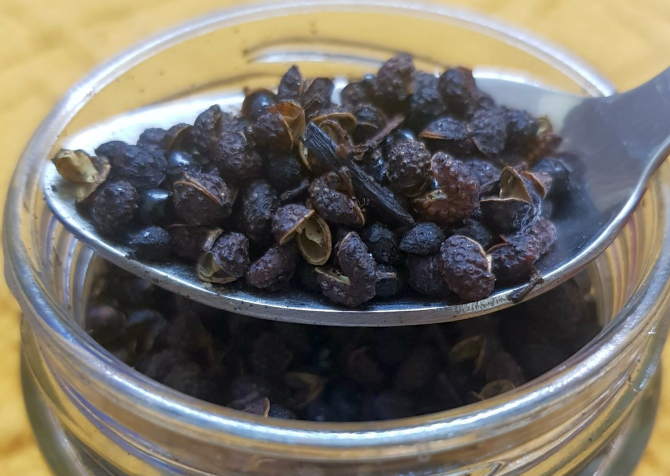 Indian Sichuan pepper plant is a shrub found in warmer hilly valleys of Himalaya, Lesser Himalayas in North East India, Eastern Ghats in Orissa and Andhra Pradesh and Western Ghats in coastal Maharashtra and Karnataka.  There are over 11 species or variants of this plant found in India. This thorny plant bears fruits in form of grape like bunch of berries. These berries when dry, form outer dry husk and inner black seed. The outer husk is commonly used as spice for culinary purposes. So be noted that, Indian Sichuan Pepper is neither a pepper or chilly.

As a medicinal herb, Indian Sichuan pepper is used as home remedy for toothache, common cold, cough, and fever. To cure toothache, a fresh or dry fruit is pressed over the affected tooth and is kept in position till it loses its pungency. Young shoots of timur are used as toothbrushes. It is used in the treatment of gastric disorders like vomiting, diarrhoea, and abdominal pain. It helps in digestion as carminative.

In the villages of Tulu region in Karnataka, the berries of the tree are commonly known as Kavunte kāyi or Petala kāyi ( kāyi = berry of the plant), which is used by rural children for playing as toy bullets.  The children while playing make piston like structures in the form of tubular structures from selected plant stalks, inside which rod like plant parts, are used to drive out the berry bullets forcibly such that berries explode with a thud sound. The tree bears fat thorns on the stem that are used by children to make rubber stamps. The thorns of Jummina tree are also used in the Yakshagana costumes, especially for designing the thorn like shoulder ornaments (known as “bhujakeerti”).

Indian Sichuan Pepper offers unique aroma and flavour to food. It has citrus overtone, slightly pungent taste and leaves behind a tingling or numbing effect on tongue and palate as an aftertaste. It blends well with other spices and often used in spice mix. Its flavour is delicate and gets lots in other spices though. The characteristic mouth numbing property of Indian Sichuan pepper makes it more of an experience than a flavour. This experience may be unnerving in beginning, but gets addictive as one starts liking this spice. In 2018, BBC listed this pepper – a zesty, grapefruit-like spice hailing from Himalayas – as an on-trend ingredient to make condiments and give alcoholic beverages like a gin and tonic for “spiky, zesty – surprisingly grapefruity – and leaves a tingly residual heat on the palate.”

Use of Indian Sinchuan pepper various according to region. In coastal regions of Maharashtra and Karnataka it is used to marinate fish. Teppal/Tirphal is also used as spice in soup and curry recipes (koddel/ ambat). Often it is blended with red chillies and coconut. In Uttarachal, the Bhotiya tribes have been using Timur to make Soup called Hag and local chutney called Dunkcha. In Nepali kitchen, it is a very common spice and commonly used in Nepali food.

Below are some recipes using Indian Sichuan Pepper / Timur / Teppal